What is Underwater Rugby? 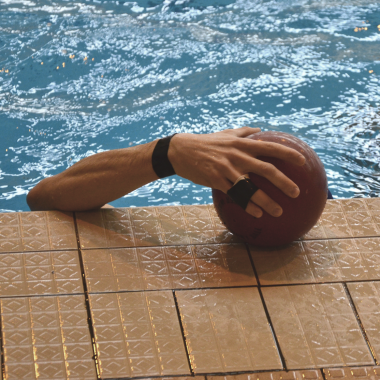 Underwater Rugby is an exciting, challenging and competitive of sport. Each team has six people in the water, and they wear fins, a mask, a snorkel, and a hat. The basic idea is to get your team’s ball into the opposing team’s bucket, by holding your breath and tackling underwater. The ball is negatively buoyant, so it sinks, and it is passed by almost “pushing” the ball through the water to your teammates.

The teams start at opposite ends of the swimming pool, with one hand against the wall. When they get a signal, both teams then race to collect the ball, which is eagerly waiting in the center of the pool. From that point, the game has begun, and the aim is to beat your opponents using skill, strength, and teamwork!

Underwater rugby was first invented in 1961, in Köln Germany. It has since become popular in many countries and was recognised by the Confédération Mondiale des Activités Subaquatiques (CMAS) in 1978 as an official sport.

How many clubs are there in the UK?

When did the Underwater Rugby start in the UK?

Pure underwater rugby was set up in June 2013, by Oliver Kraus, Robert Bonnar, and Gemma Wilts. It was supported by both BSAC and Sport England as a potentially exciting and challenging new UK sport.

Are there any underwater rugby tournaments?

Since the first championship in 1978, there have been many international underwater rugby tournaments across the world. UK players have played at a tournament in Wales, France, Austria, Greece and Italy, meeting and competing with players from across the world!

Is it difficult to play?

Many people think that underwater rugby must be difficult to play and that you need to acquire a particular set of skills. However, in underwater rugby, the most important skill for success is the ability to work as part of a team, to have an open mind, and to want to challenge yourself out of your comfort zone. The skills can be picked up and practiced in training, so the only pre-requisite is the ability to swim and a desire to attempt something new!

How long does it take to learn Underwater Rugby?

There is no set time limit, on how long it takes to learn Underwater rugby. Every session presents a different challenge for each player – experienced players are still learning to enhance their skills and fitness, where inexperienced players may be learning the basics for their first few weeks. We welcome players of all skill sets and abilities to try the sports!

How fit do you have to be?

There is a range of fitness abilities in every underwater rugby team. Although it is a challenging sport, which can be very tiring, on your first few weeks you can get involved as little or as much as you want, as you build up your fitness and skill-set.

Do you need to be a good swimmer?

To play underwater rugby, you need to be able to confidently swim. However your speed and skill in the water can be developed over time, so you do not need to be a competitive or even frequent swimmer to start this sport.

How much experience do you need to play?

None! The majority of players in the UK have never tried or heard of the sport before!

What do I need to bring with me?

Most clubs have the basics (snorkel, fins, mask, and a hat) for you to borrow, but if you have your own, feel free to bring these. Check from the club what they can provide if you want to test Underwater Rugby. You must bring your own swimming costume!

How many people are on a team?

Each underwater rugby team has a total of 12 players, of which 6 are in the water, with the other 6 players waiting poolside to substitute on fly. These are ready to jump in when players need a break. It is pretty exhausting sport so the turnover is very quick. One player is each time in the water for about 2 minutes but it depends on his or hers abilities and played position.

Is it mixed gender?

Yes, both genders play the sport and clubs generally have a mixture of male and female players of all ages.

Are there any restrictions?

At present we can only accept individuals over 18 for insurance purposes.

Underwater rugby is a full contact sport, where you tackle the opposing teams for possession of the ball, however, certain rules apply when tackling, as you cannot ever grab someone around their fins or their neck. The ball can be passed in any direction, therefore is truly three-dimensional, however, the ball cannot break the surface of the water, therefore is different than games such as water-polo. Of course, there are many other rules which govern this sport. These can be found here http://www.cmas.org/underwater-rugby/documents-of-the-rugby-commission

What is the depth of the pool?

How long are the matches?

Official underwater rugby matches last 15 minutes each half, with a 5 minute break to recover between!